Some unique and stunning photographs can be taken in the dark of night. While there are many possibilities for night photography, including fireworks photography and high-speed (high ISO) hand-held photography, this tutorial focuses on examples of long exposures (over one second) of stationary objects, at low ISO settings. 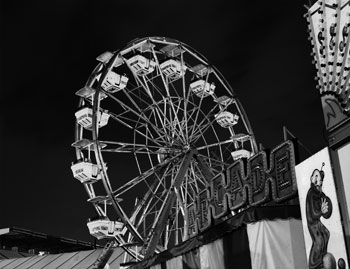 This tutorial is moderately advanced, and really will be of most benefit to those photographers with an understanding of exposure, and who have a film or digital camera that enables manual selection of aperture and shutter speed. It’s far from the final word on long-exposure photography, just a short introduction and some tips, so please share your own experiences and knowledge on night and low-light photography by leaving your comments.

For best results, you will need the following:

(1) A tripod or, at the very least, a sturdy surface where you can place the camera while making the exposure, is a necessity.

(2) A camera capable of long exposures (over 1 second). On most film SLR cameras there is a “B” setting (which stands for Bulb), that keeps the shutter open as long as the shutter release is depressed. My digital camera has the Bulb setting just after the 30 second mark when shooting mode is set to Manual. Some digital cameras may have the Bulb setting buried in a menu — consult your camera manual if you are unsure.

(3) If your camera has a mirror lock-up feature, consult your camera manual on how to use it. Though not a necessity, mirror lock-up is very effective in decreasing camera-shake during long exposures. Even professional-grade dSLR’s often have this setting buried in a menu, so check your camera’s manual.

(4) A shutter release. Again, not an absolute necessity, but it will save you from having to stand with your finger depressing the shutter during the long exposure times and, more importantly, since you are not physically touching the camera during the exposure, there is no chance that you will cause the camera to move (wind is a whole other story). For exposures under 30 seconds, you may be able to use your camera’s self-timer instead of a shutter release.

(5) A small flashlight is often extremely helpful. Accessing various settings on your camera in very low light can be next to impossible. I often set the mirror lockup function and ISO before leaving home when I am going out to shoot night photographs.

Although you can significantly decrease your shutter speeds by increasing the ISO on your camera (or using higher ISO film), the cleanest results are obtained by shooting at low ISO settings. Higher ISOs in both film and digital photography result in higher grain/noise. While this is not necessarily a bad thing (I am a big fan of grain myself), in this tutorial I am focusing on long exposures at low ISO settings for the sharpest, most detailed, results.

Find, compose and focus your subject 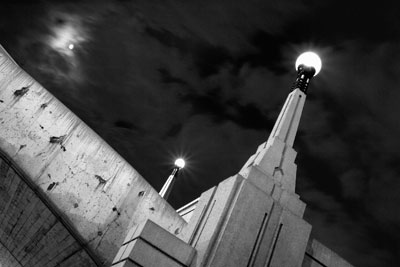 Find any subject that you think looks interesting. Set up your tripod so that it is very stable, and compose your photograph in the viewfinder. The key here is experimentation — not everything you photograph will turn out as you expected, especially in very low light photography. It’s part of the fun (and the frustration). One suggestion is to remove any lens filters from your lens — in my experience they cause ugly glare when strong light sources are inside (or just outside) of your frame.

Focusing can be a major dificulty in low light. Auto-focus, if you have it, is often rendered useless. In order to compensate for potential inaccuracy in my focusing, I often shoot at smaller apertures in order to gain a greater depth of field.

Back in the old days of film photography, proper exposure was much tougher to determine than it is in the digital age. With exposures exceeding 1 second, film suffered from what is known as reciprocity failure. What that means is that, up to a one-second exposure, film had a pretty linear response to light. After one second, this response slowed, so that it was difficult to figure out the proper exposure for a scene. With digital photography, it’s easier because you can see the resulting histogram of the shot you have just taken, and make adjustments to your exposure time until you get what you want.

Your in-camera meter may give a good reading to use as a starting point. If your subject is too dark and your camera refuses to provide a reading, try selecting a higher ISO and/or a wider aperture to get the meter to read, then translate the reading to your desired ISO setting. If mental mathematical calculations give you a headache and you are shooting digital, just choose a shutter speed and make the shot (another great product of the digital age is the delete button, for really bad exposures). By examining the resulting histogram, you can adjust your exposure up or down from your test exposure, making shots until you get a good over-all exposure. This is fine, and doesn’t take too long when the scene being photographed requires an exposure of between 1 and 10 seconds, but can be a pain in extreme situations that require much longer exposure times. 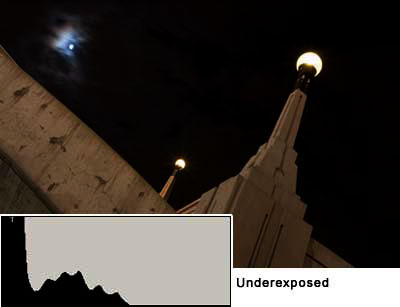 The histogram is bunched up to the left (darker values), with no values recorded to the right (lighter values). As a result, the picture is too dark for what I wanted. I wanted the lights on the lamp post to blow-out, and to get some of the detail of the clouds in the sky.

Now that you have your camera mounted on a sturdy tripod, with everything locked firmly into place, and your shot framed, it’s time to click the shutter. In the best-case scenario, you will have mirror lock-up enabled, and will be firing the shutter with a cable release, but as I mentioned previously, this is not absolutely necessary. It becomes more of an issue when printing the resulting photograph to large sizes, as deficiencies in sharpness caused by camera shake will begin to become obvious. For shorter exposures, you may be able to use your camera’s self-timer instead of a shutter release.

For a properly exposed shot, the histogram should show little or no clipping in the highlights or shadows. The examples on the right show the histograms for two separate exposures of the Film Noire shot above, along with the corresponding photo. The first shot was taken with an exposure time of 20 seconds, resulting in a shot that was too dark — there were details that I wanted to preserve (primarily the clouds) that were lost.

After examining the histogram on the scene, I then took the second exposure (right) at 30 seconds, resulting in a ‘digital negative’ that recorded all of the information that I wanted to preserve. 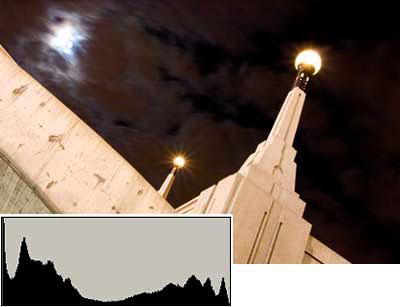 Much better! The values are more evenly distributed in the histogram, and this ‘negative’ has recorderd all of the information in the scene that I want. I now have the details in the clouds I wanted, and a pleasing flare in the blown-out light sources.

Still, the values in the concrete, as well as the moon, are far too bright for my taste, but at the point of capture the intent is to ensure that all the data in the scene is recorded, not that everything is perfect. That is, highlights that are blown-out in the negative are lost forever, and the same goes for shadow details that are blocked-up. This is why the histogram is such a useful tool — we can tell immediately after capture whether we have over-exposed or under-exposed too much and forever lost important shadow or highlight detail.

The next step, of course, is the post-processing, which for this image involved a conversion to black and white, and local contrast and levels adjustments in my photo-processing software. The completed image is at the top of this page. Unfortunately, reproduced here at such a small size and, depending upon your monitor settings*, you may not be able to see the clouds at all. But the point is that the result of having properly exposed the shot for the details I wanted to preserve ensured that they were there for me to work with in the post-processing phase. Had I stuck with my initial 20-second exposure and moved on to another shot, I would have been forced to live with a completely black sky.

Anyway, post-processing is a whole other can of worms — maybe a subject for a future tutorial!

* Incidentally, never rely upon your camera’s preview of a photograph to determine whether it is properly exposed. A camera’s display is just like a computer monitor — if you have it set to a high brightness, what looks properly exposed on your camera’s display will, in reality, be horribly underexposed. The histogram is the only reliable way to determine the range of values that you actually captured.

Check out my black and white photography galleries!